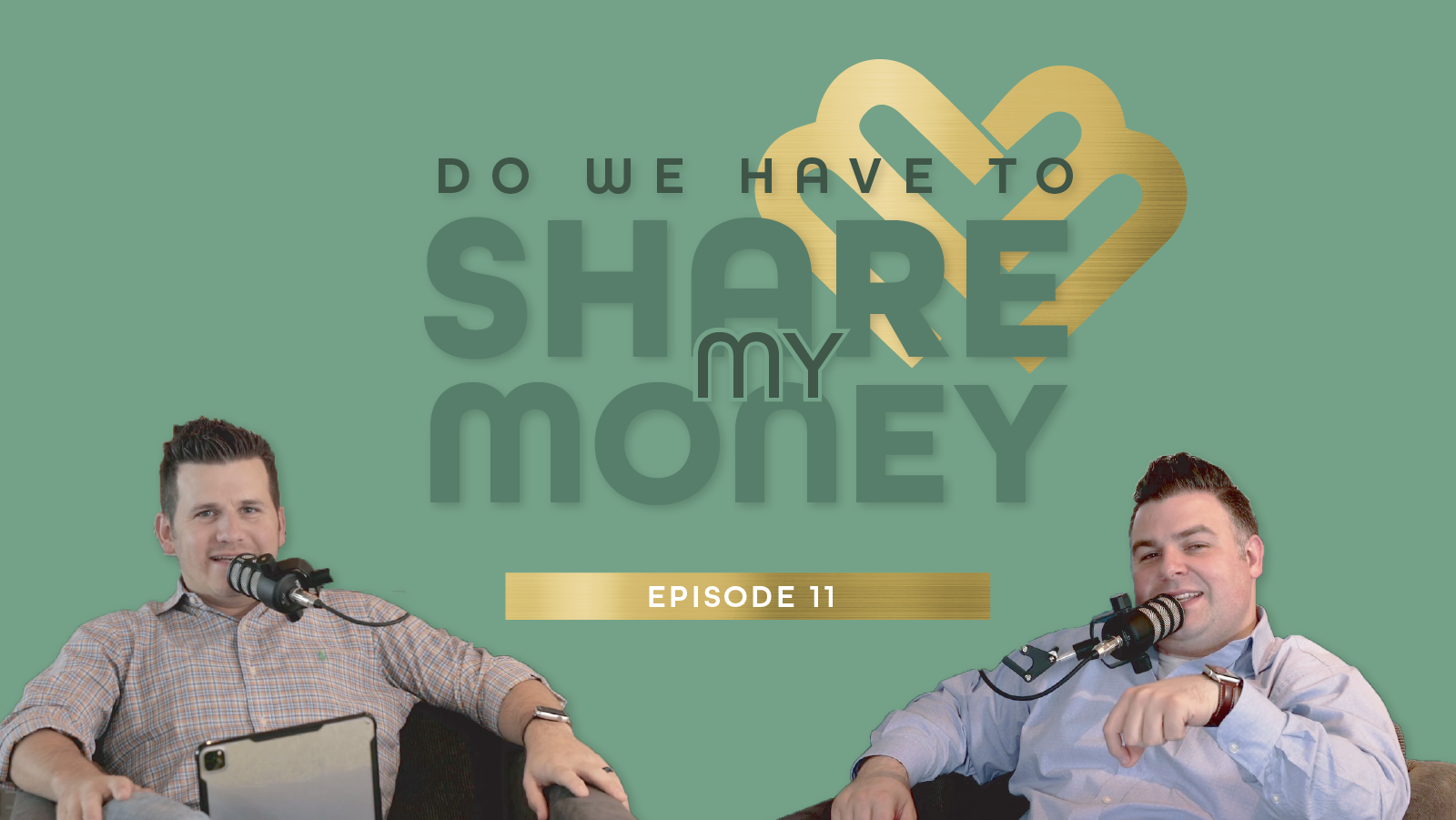 Today’s topic is a big one that many people approach differently, or may not even approach at all: merging finances.

We’re coming right out of the gate hot and laying everything on the line with you guys: Jeremy and his wife, Erica, have merged finances—one checking account, two debit cards. My wife, Meg, and I also merged all of our accounts; everything has both of our names on them.

I, for one, am a huge believer in merged accounts. One, for the sake of transparency. From the very beginning, Meg and I knew we’re on the same team now (I know, I know, I use that phrase a lot, but it’s the truth), so this is our money now.

For some, talking about merging accounts may be like hitting a brick wall or pulling teeth.

What if there’s differences in opinion? What if you’re on one chapter, and your spouse is on a completely different book? In matters of honesty, how do we navigate those financial waters when we know there’s trust issues involved?

“There are lots of things that produce challenges with our trust,” Jeremy said. “I think it’s just like anything else with having to get things out in the open. That’s almost half the battle initially. Just laying everything out on the table. This is why I’m an advocate for shared accounts—if you have a shared account, then both of you get an opportunity to say where that money is supposed to be going. It creates a sense of comradery. But once that trust and transparency is diverted and off track, it becomes antisocial trust, and takes so much energy to get back towards healthy, pro-social trust.”

As a financial advisor, one of the biggest arguments I hear against merging finances is, “We just think differently about money.”

Meg and I own another brand called The Money Couple, in which we create and share other resources with couples to avoid fights and divorces over money, ultimately aiming to help get them on the right financial path.

One of the resources we built is The Five Money Personalities program (check out the assessment here). It’s not about comparing each other’s money personalities and going to war over the differences; it’s about figuring out who you are, why you view and utilize money the way you do, and then learning how to communicate about it appropriately.

Learning about each other’s strengths and weaknesses and how to work through them together as a team is what makes you much, much stronger in the long run.

If there’s any serious objection or speculation towards merged accounts, what’s your motive behind having separate accounts?

“Just avoiding tough topics doesn’t make the tough topics go away,” Jeremy said. “It’s an issue for some people. They’ll wait to bring it up until they come to therapy because they don’t want to talk about it. It’s uncomfortable for them.”

Communication is important here—you can’t accomplish anything efficiently without talking about things. You’re in this marriage for the long haul, or you should be, for that matter; tiptoeing around and walking on eggshells when it comes to those tough financial topics with your spouse is just cause for unnecessary stress and frustration.

That’s one of the biggest reasons Meg and I got into The Money Couple and created The Five Money Personalities—we were seeing so much pain, too many disagreements, and quite a few divorces between the couples we were seeing, all because of clashes in how they each think about money.

In marriage, you put aside your differences every day to be together and love each other. Finances shouldn’t be any different. Find the root of the problem and face it head-on. Figure out how you can both work together to overcome these obstacles, and any future ones, for the better.

We all bring differences into our marriage. Some married couples grew up with extremely different backgrounds and lifestyles.

For example, Meg’s parents were entrepreneurs and small business owners with several businesses. They had done well for themselves and paid cash for most things, whereas my family was very blue collar and financed everything out to the heel.

Because of this, we had a lot to work through in our own relationship to get on the same page. Merging our finances and getting on the same page with the same hope for the future was just one of the things that helped us do that.

“Erica and I want to win with our money. We’re making decisions and working together on this so that when we get to the end of our life, it’s not, ‘Oh, we both still have to work for X amount of years.’ That’s one of the biggest advantages of shared accounts—shared goals, shared dreams, and shared visions,” Jeremy said.

Money is such a big object that it wraps people up in a controlling atmosphere. It’s hard to have those raw financial conversations, but this isn’t a one-size-fits-all subject; you have to find a common ground that works for both of you, and then work to continuously add to it.

Merging finances means showing your spouse what you’re bringing to the marriage—the good, the bad, and the ugly. Really working together on those things and striving to reach those goals is a huge part of merging your accounts and continuing to build a successful, thriving marriage.

All in all, you need to find what works best for your marriage. Whether that’s in the form of monthly financial check-ins, meeting with a financial advisor, or setting goals for the short and long term together, be open and honest with yourself and your spouse.

Transparency always makes things easier for everyone along the way!