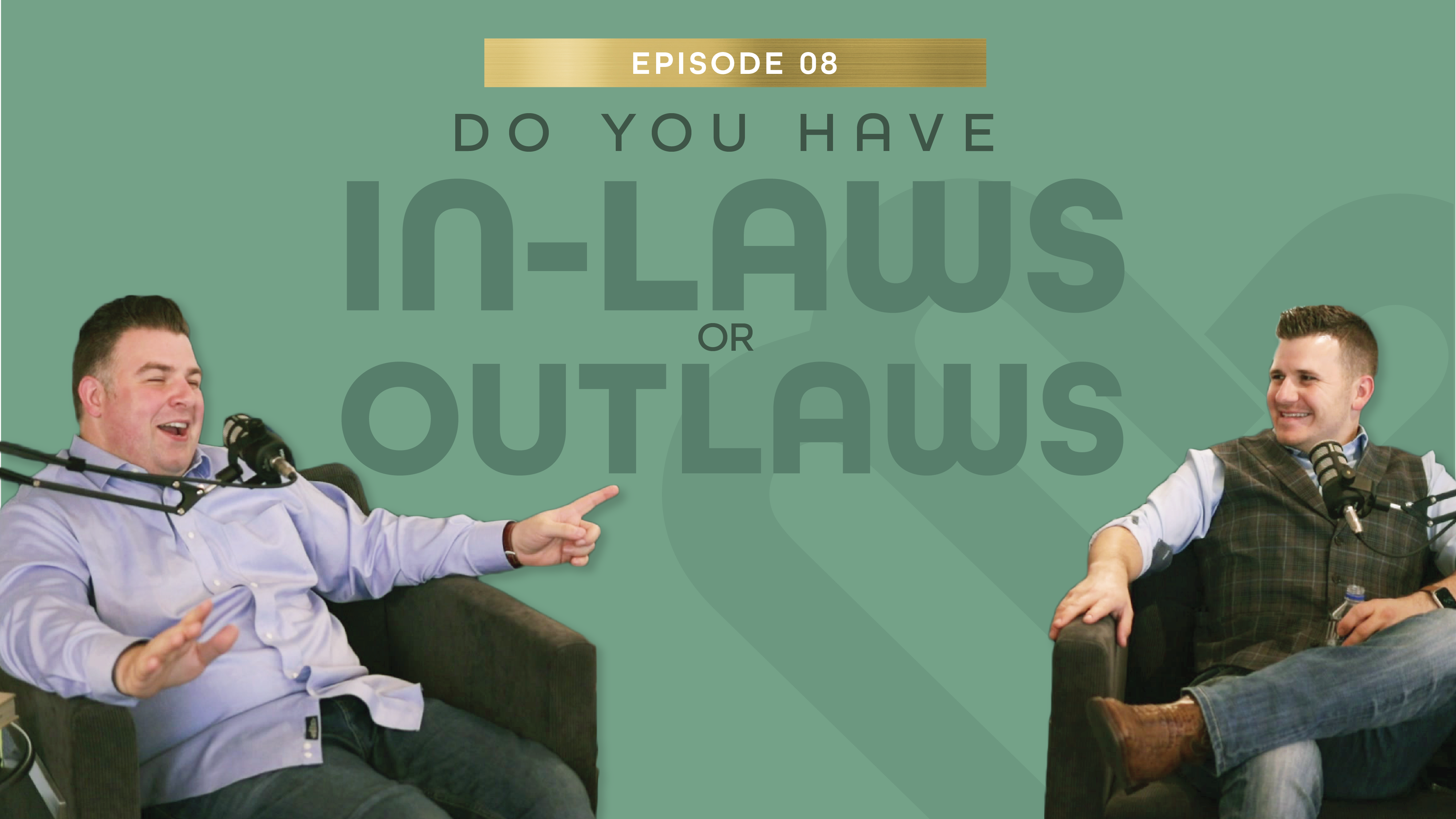 Do You Have In-Laws or Outlaws?

Hey, guys! Taylor Kovar here with Jeremy Gilliam on The Millionaire Marriage. Today’s topic is all about understanding how our spouse’s family can affect our current family function if we let them.

You’re marrying one person, not their family… right?

Well, Jeremy says that the more he studied family therapy, the more he realized that that’s exactly what’s going on. You’re marrying your spouse. AND their whole family.

And so, the title of “Inlaws and Outlaws” came to be—those pesky “outlaws” being the ones who are so drastically involved in your marriage that you really just want to put a bounty on them and have the sheriff take them away.

Jeremy says, “There’s a concept in family therapy called ‘triangulation.’ It’s basically where you bring in a third party to alleviate tension. So, let’s say you have a husband and wife fighting about money or whatever. The wife, instead of working things out with her husband, decides to go talk to her mom. So she’s bringing mommy (AKA, the third party), into the equation. All that does is cause more conflict because, why are you going to your mom about our relationship? This is mine and yours.”

Typically, someone may go to their parents regarding conflict in their relationship because that’s who they’ve confided in for years. We may appreciate their opinions… but at the end of the day, it should be just that—an opinion.

However, once the situation turns into parents making decisions for us, or one spouse only doing whatever their parents think is the best idea, it becomes much more traumatic for a relationship than one may think.

Bringing in that third party doesn’t fix the conflict; it just adds one more person to the mix. All it’s doing is creating more tension in areas where there shouldn’t be any tension in the first place.

That’s how in-laws become outlaws: there’s no boundaries and no parameters on their influence in your family.

Don’t get us wrong, we’re huge advocates for being influenced by others. We don’t think you should be a closed-off family; you want to be an open system with the ability to be influenced, but always to an appropriate degree.

It’s all about creating the right amount of separation between you and your parents.

When Jeremy’s working through this in a therapy session, he helps the couple see things from an “I” position, as individuals: I am feeling this way. I don’t care what anyone else says. This is how I am feeling. These are my thoughts. Not mom’s, not dad’s, not grandpa’s, not Susan’s, not Jim’s—MY thoughts.

When it comes to Thanksgivings, and Christmases, and all of those other good ol’ family-centered holidays, how do you navigate those waters? How do you protect your spouse in those scenarios and set the necessary boundaries in those situations?

If you’re having to protect your spouse from your family, that means there’s something to protect them from. It could be a specific family dynamic, for example. Maybe they’re extremely harsh. Maybe they beat around the bush a lot, or maybe their sense of sarcasm can be considered offensive to some.

“So first, I think you’d have to start off with some serious open conversation with your spouse,” Jeremy said. “Explain to them that, hey, this is how my family is. I can’t change them, so let’s mitigate some of this by only visiting for a few days instead of a whole week. The second thing is being willing to stand up for your spouse. Maybe your mom mentions, ‘Oh, she/he doesn’t do this for you!?’ Hold on, now. Mom, this has nothing to do with my spouse. This is me and you. If you have a problem, we can talk about it.”

Here, you have a couple of options. You can blow everything up (which, unsurprisingly, doesn’t resolve anything), or go straight to the individuals who have a problem. As part of the family of origin that we’ve mentioned in previous episodes, it’s always better for the spouse whose family the issue is stemming from to address that family member directly.

It’s all a matter of saying, I know this is how the family dynamic is and always has been, but we aren’t going to do that with my wife/husband. Even if it’s uncomfortable. Because at the end of the day, you’re going home with your spouse.

Your Marriage Is On The Field—Keep Parents In The Stands

You may have been a part of your parents’ team for 20, 25 years, but you’re on a new team now. The two of you created this new team once you said “I do” at the altar.

Being bold enough to confront your parents about a situation, for your spouse’s and your marriage’s sake, has the potential to solve so many problems.

Sure, they’re our parents, and we love and respect them, but once they stop respecting your spouse, that’s where the line must be drawn. Some parents may get upset and defensive—like most of us do when we’re told we’re doing something wrong—but having that conversation will build the bridge to healthy boundaries.

Remember, honesty is always the best policy. Just get things out in the open to where you can address them and come to a compromise, or some sort of solution, at least. We’re all adults here—let’s work on treating each other as such.

The Good, The Bad, And The Ugly

The other day, someone in my office mentioned the quote, “It ran in my family until it ran into me.” I LOVED that. You’re not going to want certain things to continue in your own marriage.

“My mind goes back to a book I read in grad work by a lady named Monica McGoldrick,” Jeremy said. “She was writing about family trees, and mentioned that you are destined to repeat patterns from your family, unless there is an agency of change. Whether that’s a conversion or going through therapy, there comes a point where you realize that some of the things your parents did weren’t good. It takes a stance of, by sheer willpower or by help from God, choosing not to allow those types of patterns to influence you.”

When we first got married, Meg and I had many, many talks about what we each thought our parents did well, and what they maybe didn’t do so well. I truly think that was a huge factor in our marriage being so strong today, because we were able to merge our two worlds together so we could see the benefit of both of our parents, while putting a stop to the other not-so-good things.

In the end, building that communication with your spouse allows you to have the understanding, freedom, and flexibility that goes into a strong—and lasting—marriage.

This is definitely a topic that could see a sequel in the near future… so, if you have a crazy in-laws story, or if you have some advice for someone who might be going through tough situations like this, give us a shout.

Thanks for tuning in again, we’ll see you next time!