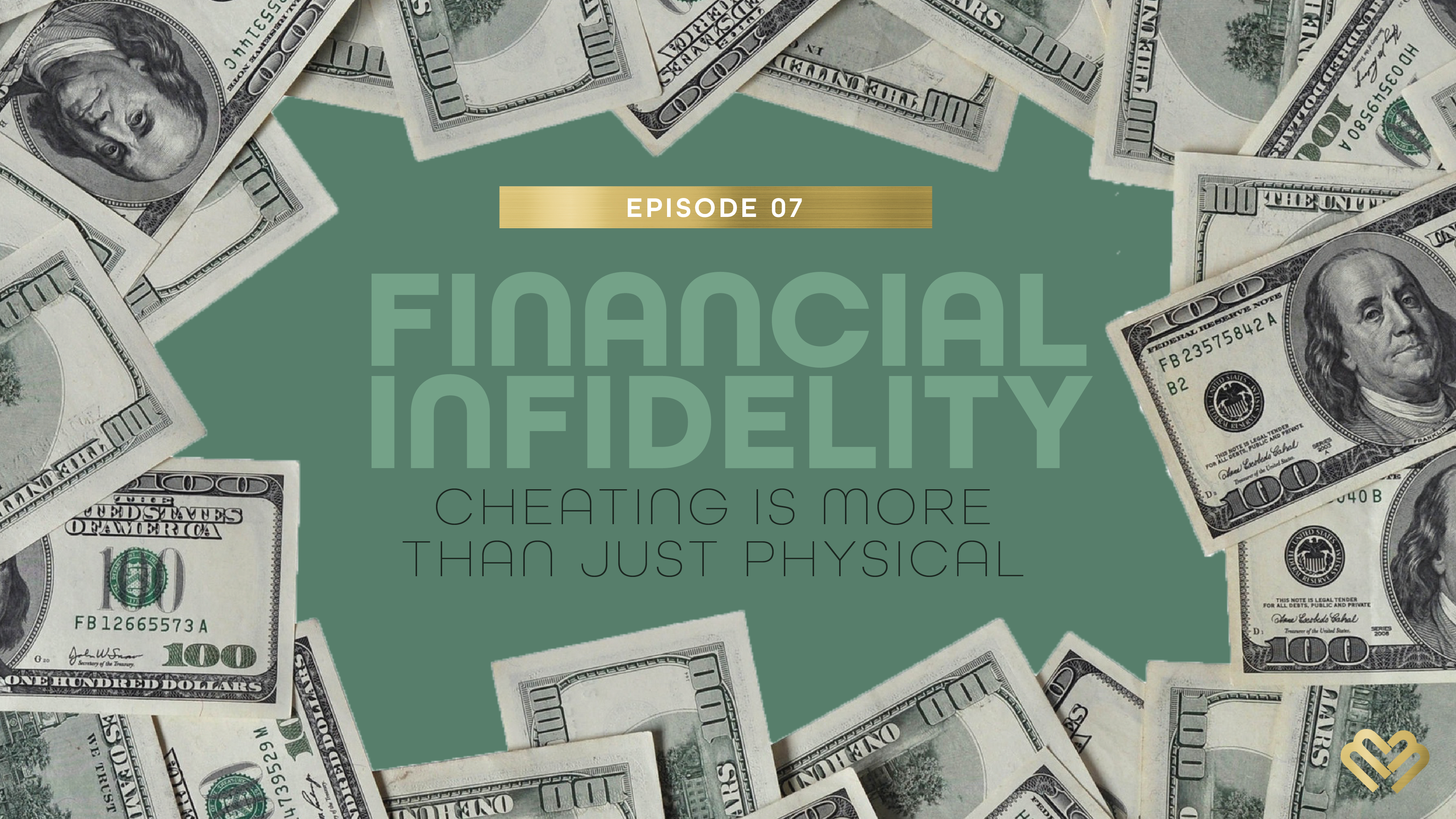 I think I might be able to call myself the expert on the show this go around… kidding! BUT, it is a topic that’s near and dear to my heart because I deal with it on a daily basis. I’ve written about it several times, we’ve been quoted about it many times in the media, and our team has tons of resources about it on themoneycouple.com.

That topic is, as you read in the title, financial infidelity. (Or, “financial adultery,” as I’ve heard some call it.)

So, just to jump right in, one time, I was working with a husband and wife up at the office. The wife ended up having to leave early to get the kids from school. When she leaves, the husband says, “Okay, hey, now that she’s gone, here’s this other money for another account I have that she has no idea about. I need your help with it.”

He continued, “What’s wrong with just a little money account on the side? I have it just in case something happens.”

That. That right there, that’s financial infidelity. Cheating on your spouse with your money.

You may be thinking that there’s no way financial infidelity can cause the same problems as sexual infidelity. But it does, because the same things are happening: there’s secrets that are being hidden. You’re lying to your spouse. What results is a breach in trust that’s difficult to repair.

Forty percent of people who are in a serious relationship have admitted that they were hiding a checking, savings, or credit card account from their partner. That’s almost half of marriages in which someone is accountable and purposely hiding this money.

In a clinical setting, Jeremy says he most often sees this while working with couples with a huge power difference. Maybe the husband is super controlling about how much money the wife gets and how she spends it. Maybe the wife goes out and gets a secret credit card, to balance the control out.

What about each person’s right to autonomy? So you think your wife or husband doesn’t deserve to know where the money is or that it even exists? Why do you believe they don’t deserve to be a part of that process?

In my own financial business, I see it a lot where one person kind of dominates the finances in a relationship.

People always find it surprising, but for a long time, Meg was the one who actually handled our day-to-day finances. I mean, I do this for a living, but she managed them back in the day because during that season of our life together, it just made sense for her to do it.

Now, I’m a big advocate for “You can’t manage what you can’t measure.” She never hid our finances or our financial situation from me; it had a lot to do with transparency. Coming together and knowing where you want to see yourselves in the future financially takes teamwork and being open and honest.

Like Jeremy said, “Just winning with relationships in general, you have to be on the same page.

First asking couples, well, do we want to make this work at all? If this relationship is important to you, let’s pull out all the stops, let’s open all our hearts, our phones, our accounts. Let’s be transparent so that we can win with money, and so we can win with our relationships.”

Think about it: if you’re at odds with one another, and only concerned with how YOU can win (not how you can win together), that ultimately means that your spouse has to lose. Plain and simple.

So it’s the same thing with money—financial infidelity, financial separation, money lies, money, secrets, secret accounts, overspending, things like that—how was that helping you both win? How do we create a win-win relationship?

The only way you’re going to win together, is literally, winning together.

Michael Jordan was a fantastic basketball player, but if you put him versus five other guys, he’s going to lose. Every time, no matter how great he is. Why? Because it’s a team game.

And, a newsflash in the same sense: Marriage is a team effort. You have to be doing this together! Financial infidelity will only hinder your ultimate goals and your overall happiness.

Infidelity of any sort is traumatizing, because three things happen, causing stress and strain:

It breaks the trust that should come within a marriage. It completely destroys it.

Jeremy said, “Erica and I have one checking account where we both have access to it. We both do our monthly budget together, so we’re both constantly looking at our numbers. If my wife had a secret account or a secret credit card—it’s like a mind grenade. I can’t fathom that. It’s a real issue that’s plaguing relationships.”

We’ve talked a lot on this podcast before about being intentional with your money and with your marriage.

Going back to the guy I mentioned earlier, who had the secret account he wanted me to help him with (without his wife finding out), I straight up told him that I don’t do that here.

If we’re going to work together, a couple has to be on the same page.

Now, we’ve created a financial infidelity scale: a really simple questionnaire on our website, themoneycouple.com, that each spouse can take. It gives them a score that’ll help them to know where they’re at and how they can work on improving themselves. Couples are then able to follow-up and continue working on their progress using the ongoing list of resources we have available as well.

Getting into the same account removes a lot of that fear and really makes things transparent.

Meg and I were fortunate to have some really great mentors in our life early on. They brought about this idea of us being on the same team in marriage and used the comparison of a baseball team: I’ve never once seen a team win the World Series where the first baseman won, and the third baseman didn’t.

Jeremy mentioned, “Oftentimes, we’re the product of our environment. So you’ll see the way one of your parents or grandparents treated the other one with money control, or whatever it may be, and you start modeling that behavior. So, who has given you this perception that this is appropriate behavior? How did their marriage work out?”

Come together as a team. Get on the same page. Become one and just plan it out.

I tell people, look, you have meetings at work because y’all need to get on the same page. The same thing can go for your household: call a family meeting, print it all out, make a PowerPoint, whatever that is.

If you’re going through something or you want to talk to your spouse and don’t know how to approach the subject, give us a shout and we’ll be happy to provide some resources.

Thanks for tuning in again. We’ll see you next time!