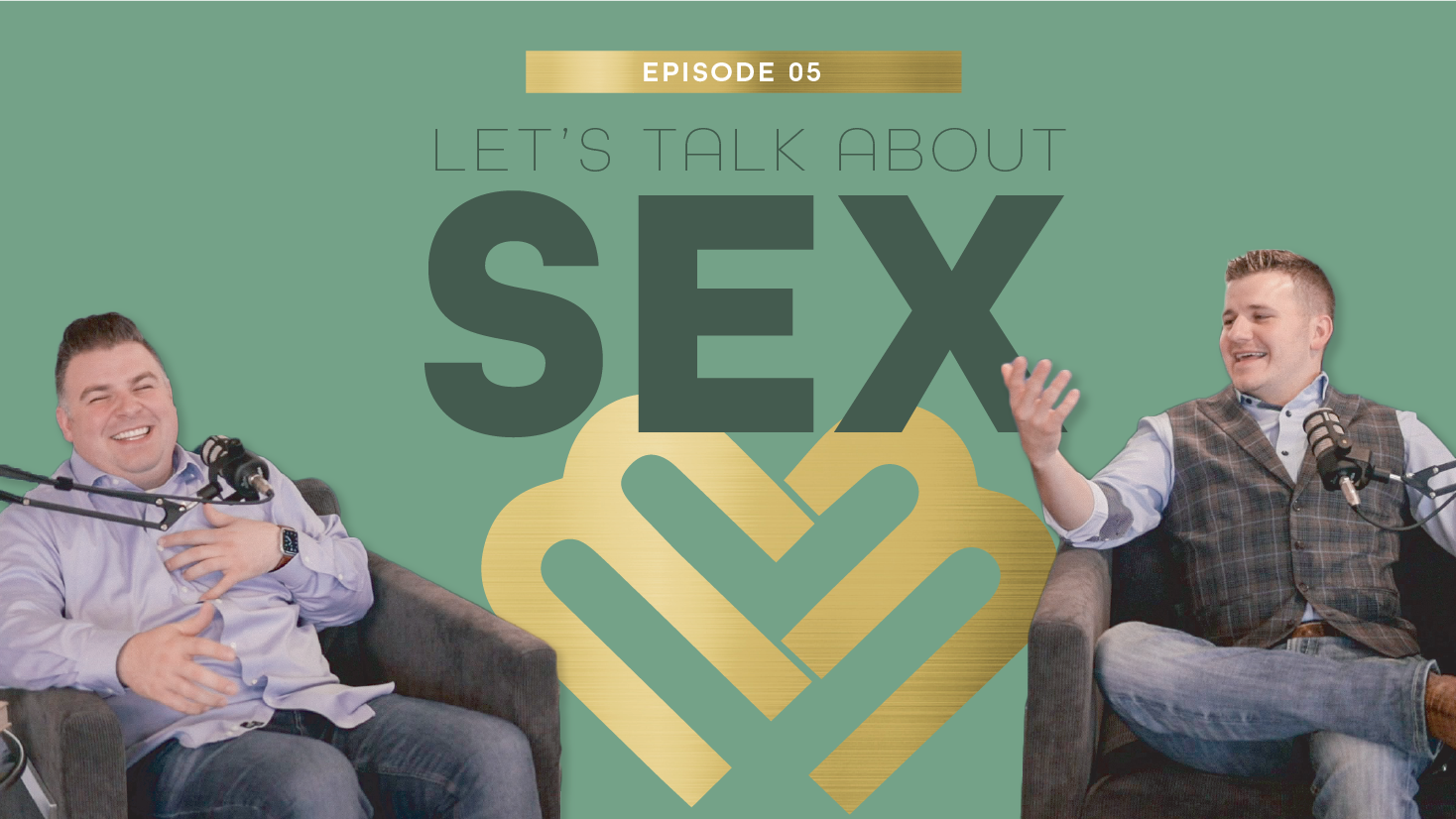 Yeah, we kinda just jumped right into that one with the title, didn’t we? Haha, welcome back to another Millionaire Marriage blog! Today it’s Jeremy Gilliam, along with my wife, Erica, as well as Taylor Kovar and his wife, Megan.

So… the big S-E-X. We talk quite a bit about marriages on this podcast (huge shocker…), and intimacy is definitely not one of those weird, taboo topics that we’ll shy away from. Let’s get started!

When it comes to sex, everyone goes into it with different expectations. Now, those expectations (along with most anything else) are probably set by social standards, media, family, or whatever else it is that you’re around or were exposed to.

“We see so many couples who are bringing sexual expectations from things like that into their marriage,” Taylor said. “It drastically changes what they think should be a healthy and happy sexual relationship. From a therapist’s viewpoint, how do you (Jeremy) handle that when you have someone with those varying expectations?”

I’ll tell you—as a marriage/family therapist, part of my job is to talk to complete strangers about sex. And from what I’ve seen, getting things out in the open is probably the most important thing you can do.

I remember teaching about this at the college and I said, “It’s so interesting how many couples have sex but never talk about it.”

Students’ brains were melting out of their ears because they couldn’t believe what I was saying. When you work with couples like I do and you realize how few of them actually talk about sex—both what’s working and what’s not working—it’s staggering. Especially if we know that sexual communication is directly linked to relational satisfaction, this is something that couples need to be doing in any stage of their marriage.

Sex Is Not Shameful

Which perhaps brings up an even bigger challenge for those who grew up in very faith- and religion-centered homes. Some are told from a young age that sexual expression is bad. That it’s wrong. That there should always be room for Jesus between the two of you.

People think it’s a curse word when you say it. “Hey, you can’t talk about that.” Talk about what? You mean sex? No, we can’t talk about that because it makes YOU uncomfortable. (And if you are a person of faith reading this, I probably don’t need to remind you that there’s an entire book in the Bible that deals with a man and his lover called the Song of Solomon.)

Don’t Be Afraid To Bare It All

Here’s the thing about telling your spouse your hopes, expectations, thoughts, and all that when it comes to sexual intimacy in your relationship: it takes a huge level of vulnerability, because you’re putting yourself out there and hoping that your spouse doesn’t crush you.

“Vulnerability is part of what marriage is meant to be. You’re meant to be fully known by someone,” Erica said. “It’s fully knowing someone, allowing yourself to be vulnerable, and then giving yourself over to that person to be known in every way possible. I think that’s so beautiful. Just take that chance and talk about it. What do you have to lose? You married each other for a purpose. I think that reason alone is worth the work.”

When you’re able to talk with your spouse about what your sexual expectations are, it could potentially lead to flexibility on their end. Even if they weren’t having the same thoughts as you, they could put forth effort to try it anyways. And that aids in marital satisfaction.

“We all know that everything comes back to communication,” Meg added. “If you feel that you can be transparent when communicating about your sex life and those expectations, then you’re going to be able to be transparent in the everyday aspects of your daily life. It definitely opens up that conversation.”

Another thing to note about sex in a marriage is that it doesn’t necessarily start in the bedroom. And I don’t mean you start being intimate from the kitchen and go down the hall with clothes flying and then you end up in the bedroom. No, I mean setting the stage (and ultimately setting the mood) starts elsewhere.

The act of just doing things for one another around the house can go such a long way, but I want to be clear—this shouldn’t be something like, “I’m going to do this, so I can get sex later,” or, “I’m going to do all of these things so something happens tonight.”

No, it should be, “I’m going to do this because I love you and because I’m a member of this family.” That’s one of the most attractive things a spouse can see, in my opinion. As I like to say, sex starts by taking out the trash in the morning.

It shows your spouse that you’re engaged in this relationship, no matter what happens tonight. You’re on the same team, so you do things because of who you are together.

“Some couples treat sex like a to-do list. ‘Alright, got that done, no big deal.’ But this IS a big deal—it reduces intimacy down to just the act rather than what it should be as a whole,” Erica said.

And I agree. I think our culture has diminished sex to just the physical act. The way I define healthy sexual functioning is a mutually fulfilling experience for BOTH parties that involves the body, the mind, and the emotions.

“That whole emotional side is huge,” Taylor said. “If you can’t become emotionally connected, you’re going to feel emotionally unsupported. If you don’t feel supported, or if you don’t feel that your spouse thinks you’re attractive outside of the bedroom, there’s some basic insecurities and hindrances there that lead to excuses like, ‘All lights off. You’re never going to see me.’”

And open your eyes. Literally, open your eyes. That’s why sex involves your mind. It’s not just a physical act! If you don’t like keeping your eyes open during sex, that might be an indication of needing some relational work. What is it about your spouse or your relationship that you don’t want to see?

The availability and accessibility of pornography is a major issue for some couples in their intimate life and their sexual expectations as well.

The first question may need to be, “Why is it or why isn’t it okay for our relationship to include pornography?”

It’s not a matter of morals or whether we think it’s right or wrong. Dig deeper: Why do you or why don’t you want to keep doing this? What’s your spouse’s opinion on it? What’s this doing for or to your relationship?

How Can We Reconnect?

If your marriage has fallen victim to becoming a “sexless marriage,” AKA, having sex less than 12 times a year or only once a month, how do you get out of that?

Meg offered, “Like we discussed earlier, it definitely begins outside of the bedroom. For the wife to feel more connected to the husband, and vice versa, you’re going to have to maybe step up in places that you weren’t already. Maybe it’s doing the dishes or taking out the trash or things like that, but that definitely will help you take those steps toward feeling more intimate with your spouse.”

“I think showing your spouse that they’re a priority,” Taylor added. “I always want Meg to know that I find her attractive, so I try to give her words of affirmation. It’s one of her love languages. To be honest, it’s not what I’m good at. It’s not what comes naturally. I actually set calendar reminders to send her flowers and a sweet note and I Google examples of words of affirmation. It happens even more and more now, but if I can build that routine into my daily life, I won’t need reminders. It also helps me to stay connected with her outside of the bedroom, which leads to better intimacy between us.”

If you’re dealing with a sexless marriage, and it’s been a long struggle, start somewhere. Start with a hug. Start with some physical connection and let it build. Go to whatever this looks like and start to build that familiarity back.

It’s easier, but that’s not what’s going to make you happy in the long run. That’s where you end up with couples that are sleeping in separate bedrooms or couples that haven’t connected in years. Every couple can have a happy, thriving, successful marriage. It’s totally possible, but it takes work. Invest in it.

This whole podcast is The Millionaire Marriage—finding wealth in your marriage. Physical intimacy is a massive part of that, so I’m sure this probably will not be our last episode or blog talking about it. Having appropriate sexual intimacy is a huge factor in what makes a marriage, a “thriving” marriage.

So, if you enjoyed this topic and would like to learn more, subscribe to the podcast, visit our website at themillionairemarriage.com, submit questions to us, and find us on social media.

We’d love to connect with you guys, and we’d love to answer your questions either on the podcast or privately. We want to help in any way that we possibly can, so don’t hesitate to reach out. Thanks for joining us again!

Be sure to listen in on this episode (and others too!) by visiting our podcast episodes page. You can also like our page on Facebook to stay up-to-date with all things Millionaire Marriage!