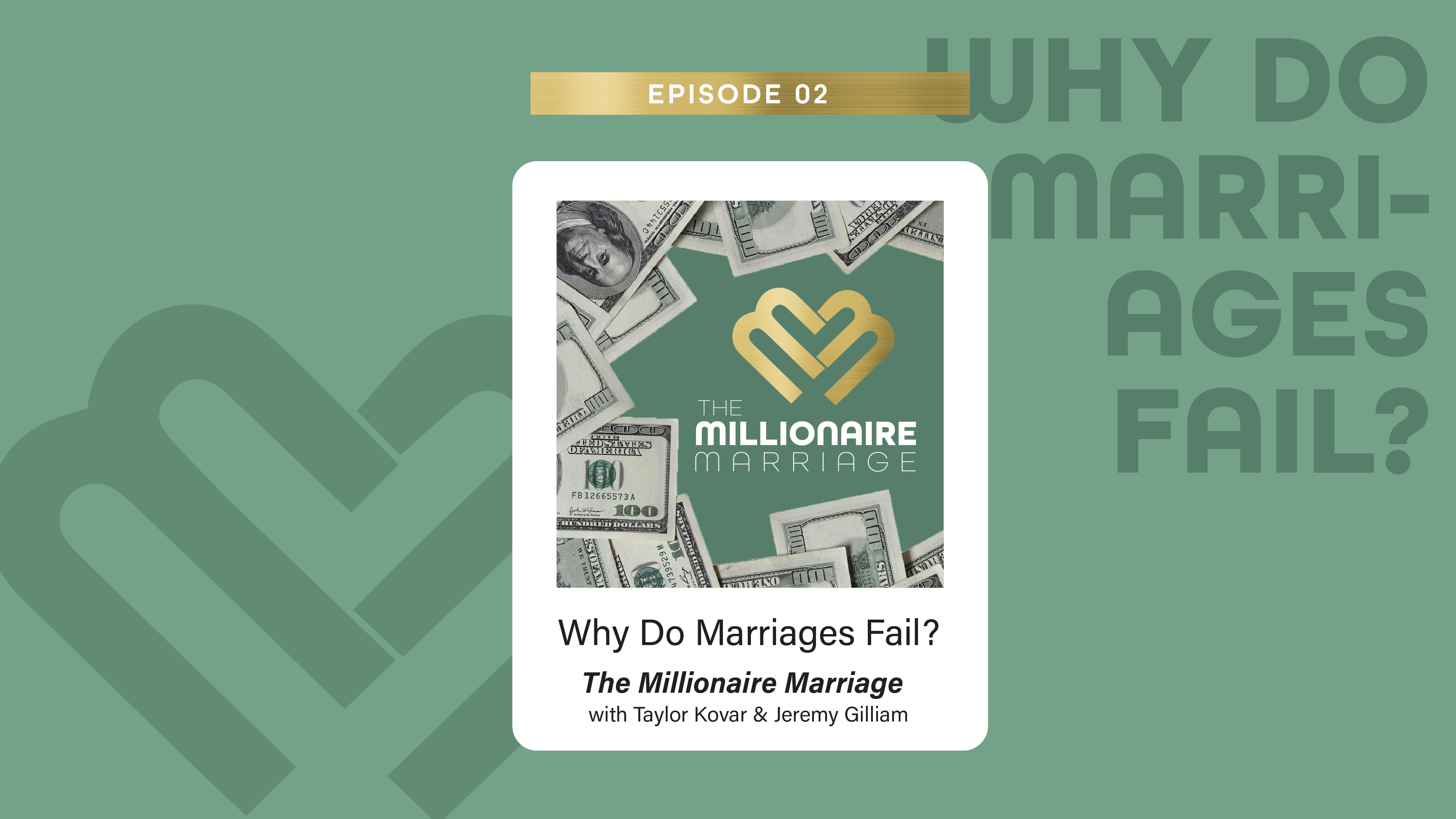 Why Do Marriages Fail?

Hey, guys! Welcome back to another Millionaire Marriage blog post, where a financial advisor and a family/marriage therapist talk raw topics in relationships—you name it, we’ll probably discuss it on our podcast!

I’m Taylor Kovar, the financial advisor in the equation. My buddy, Jeremy Gilliam, is the therapist. Now, many, many times, Jeremy has mentioned that one question in particular always arises in each and every one of his premarital sessions. That question always asks, in some way, shape, or form, why do marriages fail.

I wanted to talk a little bit today about tips for a few different people: the pre-marriage couples, the newlyweds, and the marriage veterans who have been together for a very long time.

One of the things Jeremy runs into a lot is the young married couples who aren’t able to shake themselves from unrealistic dreams and are stuck in their version of a fairy tale.

The fact of the matter is, a lot of marriages don’t end happily ever after, they end in the divorce court.

We all love the idea of perfect fairy tales… and yes, people can (and should) dream, but we want those dreams to be founded in things that are real and attainable. Things that are right in front of them in real life, not things that come out of a storybook or off a television screen.

To really root your marriage and expectations of your spouse in reality, try starting with something super basic, and super opposite of anything fairy tale perfect.

For instance, what’s more basic and imperfect than a list of chores! So—who’s doing the dishes? Who’s doing laundry? Who is getting gas? What about mowing the lawn? X, Y, Z? Answering simple questions like these can help ground a marriage in the reality of those dreams we have.

Megan and I dated for 7 years before we got married. No one ever told us, “You should go through some sessions to prepare.”

We went through a huge learning curve that first year or two.

See, I had moved out on my own two weeks after I turned 18. I was raised to be extremely independent, so I had my own bills, my own apartment, my own life. I was just doing my own thing, with laundry, dishes, everything for three years before we got married.

Well, we got married, and it was immediately a struggle. We had to figure out and manage everything—just the TWO of us.

I was so used to doing everything my way, how I want it done, and all of a sudden I’ve got this other person here with me. I really wish someone would have sat down with us and said, “OK, who’s going to do some of this stuff? What will either of you do around the house, in daily life, and in the relationship?”

Again, the whole thing about unmet and uncommunicated expectations. It’s so important to lay this foundation first!

So many couples never voice their opinions on things like this until they’re in the middle of an argument, and that’s where things get really ugly. These expectations get swept under the rug and don’t come out until a major blow-up.

Now, Meg and I have been married for almost 14 years. We’ve been together for over half of our lives and we’re still working on communication today. Even something as simple as, “I really need you today” can make a big difference.

Another big thing that should be at the top of your priorities list in your new marriage is to create joint accounts. You know, having one account that income and expenses are coming in and out of with both of your names on it. Yeah, BOTH.

Being able to see all of that with no obstacles gives you transparency and responsibility. We’re on the same team—what do we have to hide?

Budgeting kind of gets a bad rap. Look, I hate it myself, but I also understand the importance of creating an outline like that to really help lay everything out in front of you. It gave Meg and I the freedom we were looking for, because we realized we were pretty much nickel and diming ourselves.

With the right perspective and effort, you could try splitting your income up into a few different categories:

A budget portioned out in this way allows you to breathe better because you know exactly where your money is going, and how much.

In my job, we want to see people succeed with their money. To be wealthy. But to also understand that wealth isn’t a number, it’s having a surplus.

Something I’ve lived by for a long time now is the concept that wealth equals freedom. No matter what phase of life you’re getting married in, you’ve got goals. You’ll want the freedom to be able to do everything you want. All it takes is discipline—together!

You Are Where You Came From

In therapy, Jeremy calls it “family of origin.” There’s a chunk of your parents in the way you think, the way you behave, the way you respond. A lot of what you do is from what you’ve already seen in the environment you had with them.

Author Peter Scazzero says, “Jesus may be in your heart, but grandpa is in your bones.”

When Jeremy does premarital counseling, he usually does six 90-minute sessions. They’ll spend one entire session on family of origin and work on in-depth family tree diagrams called genograms.

Looking at those familial patterns is important because that’s part of what you’re taking into your marriage. The more helpful information you have from past family history—general upbringing, childhood trauma, anything—you can better grasp why you’re doing something now.

Just remember that you can’t use any of that as a crutch or as an excuse to continue to set unhealthiness loose in your relationship. You’ll always, always want to be working on things and bettering yourself for your spouse.

It’s unbelievably tragic, but most divorced people say, “We just didn’t start off right. We didn’t have a firm understanding of each other because we threw kids in the mix right away. We focused on them for 18, 19, 20 years. And when they left, we didn’t know who we were anymore.”

When you’re building a house, there’s a reason you focus on the foundation so much. You don’t want any cracks, breaks, or separating walls later down the road, all because the foundation wasn’t great to begin with!

Your goal to start off with is to not need repair later. Foundational repair in your relationship won’t be easy to fix, but it is possible. It’s all about making sure that you’re doing your best at the very beginning of your marital relationship, and continuing that same effort throughout.

No matter what phase of marriage you’re in, keep the idea alive of investing consistently, every day, so that years from now things are still rocking right along.

I’ll leave you guys with a few thought-provoking analogies today:

You don’t change your car’s oil because there’s something wrong. You change the oil to prevent something from going wrong.

A doctor can’t have surgery on himself. So what’s he going to do? Go see another doctor.

A shack built on a rock is far better than a castle built in the sand.